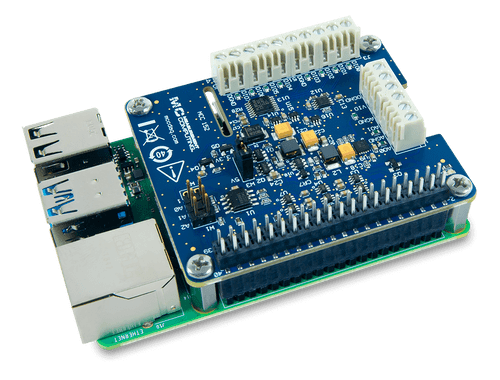 The Measurement Computing MCC 152 Voltage Output and DIO HAT features two channels of analog voltage output and eight digital I/O for Raspberry Pi-based systems. The 12-bit voltage outputs feature a 0-5 V range and can be updated at up to 5 kS/s. Up to eight MCC HATs can be stacked onto one Raspberry Pi.

All DAQ HATs include C/C++® and Python™ examples and open-source library. Comprehensive API and hardware documentation are also provided.

Raspberry Pi is not included with the MCC 152.

The open-source MCC DAQ HAT Library of commands in C/C++ and Python allows users to develop applications on the Raspberry Pi using the Raspbian®/Raspberry Pi OS®. The library is available to download from GitHub. Comprehensive API and hardware documentation are available. The MCC DAQ HAT Library supports operation with multiple MCC DAQ HATs running concurrently. The library includes example programs developed in C/C++ and Python that users can run to become familiar with the DAQ HAT library and boards; source code is included.

Quickly find what you need to get started and reduce mean time to measure.

All product support including documentation, projects, and reference material can be accessed through MCC resources.